I think, without being the promoter of negativity, I'd be pretty confident in saying that January, of all 12 months of the year, happens to be a really bad month...

Apart from having to contend with ambitious New Years Resolutions (for those that make them), you are also required to curb socialising as a result of abstemious friends and this year, more so than any previous, there seems to be an increase in this.

I have been beating the anti-Abstinence drum for a number of years but to no avail, so, instead of joining you, I'm having a relatively solo celebration (bar one or 2 hardcore friends) and in honour of this, I'm pulling out the big guns tonight and reviewing a 13.5% black IPA, not just any though...
The Devils HalfAcre by Porterhouse Brewery 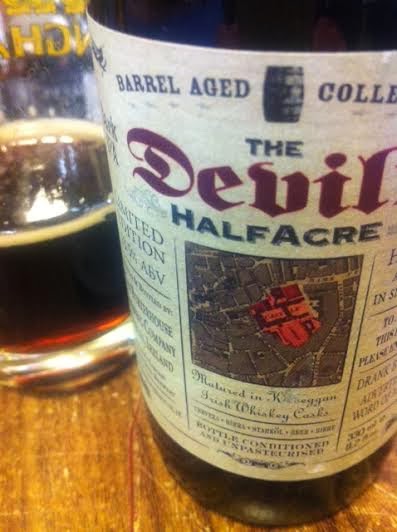 Porterhouse, who never disappoint, have played an absolute blinder with this Limited Edition.
A black IPA aged in Kilbeggan cask, bottle conditioned and unpasteurised.
This pours like a porter with a frothy stout head.
The nose is packed with coffee, black liquorice and some cocoa and that same characteristic synonymous with Black IPA's... Germolene, it's definitely there, despite what you say!

The palate is treacly with espresso and black liquorice and the minute it hits your stomach, you feel that 13.5% abv but not unpleasantly, it's like someones kick-started the furnace.

As with all Porterhouse beers, they're amazing value and quality and consistency is their family attributes.