For all those that received The Beer Box this December 2013, you more than likely unwrapped one of these... 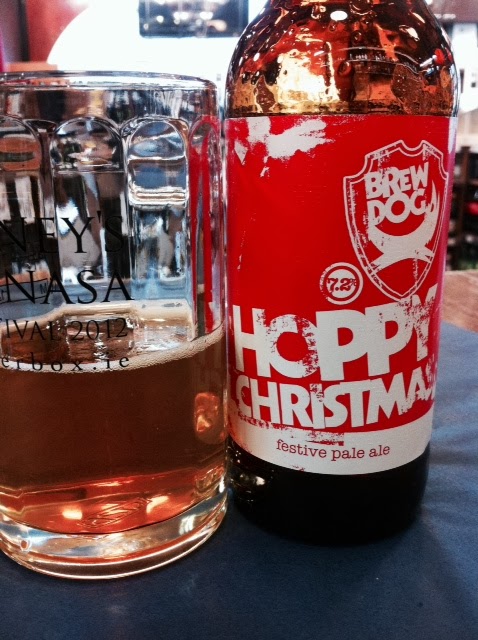 This replaced the highly criticised label ''There is no Santa'' by Brewdog, in our line-up, which appeared in our 2012
Original Beer Box.
I was under strict instructions from some of our corporate clients, to NOT feature it again, as a result of
''An inappropriate bottle statement'' and recipients having to wrap ''said'' bottle in Christmas paper, in order to consume in the presence of children.
In essence, Brewdog/ Beerbox.ie potentially ruined Christmas for 100's of literate Santa believers, however, it wasn't the only barred beer from the 2013 box, Santa's Butt, Reindeer Droppings and Pearl Necklace were to name but a few...

So, we settled on Hoppy Christmas, the festive Pale Ale and I'm happy with the substitute!
At 7,2% though, a few of these down your neck and you could end up ruining Christmas yourself...

A golden Pale Ale with flecks of red.
The nose, an array of tropical fruits, mango, grapefruit, pineapple - a Caribbean Fruit cocktail and pretty mouthwatering at that.
The Palate displays strong grapefruit flavours with a slice of  papaya and a crunchy granny smith on the finish.
For a hoppy Pale from Brewdog, renowned for their hop enthusiasm, there's little-to-no hop astringency on the finish, a true Pale Ale.

If you haven't gotten stuck in already, do it, with that much fruit, it has to comply with your January juicing diet.