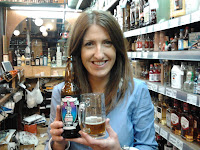 One of the most popular breweries on tasting at
''Deveney's Lughnasa Beer Festival 2011'' but due to high winds; Tornadoes and Hurricane Irene; the stock was a little late. How and never; it's here; refrigerated and ready to be tasted... The Thursday Beer tastings resume; after a long pre-festival break.

Dead Guy Ale; with what I thought was a small child skeleton with a Pope's hat and a tankard of beer on the label; initailly; had to be first up for tasting. However; thankfully; it's apparently not a small child; it's just a skeleton wearing a beehive hat; so you can drink easy my friends!!...
The image on the label is to honour the Mayan Day of The Dead (kinda like our Halloween); this is the closest we'll come to a Autumn Seasonal Beer this year.
*Possible Trivia Pursuit interest* and for those of us that aren't familiar with The Mayan Day of the Dead; me included until I did my research. It's the celebration of the Monarch Butterflies that return to Mexico each year; around the end of October; they're believed to bring the spirits of the dead home.  These spirits are honoured during  ''Los Dias de los Muertos'' - Days of the Dead. This tradition dates back to 1800 BC.
The beer pours a dark golden amber ale colour with a red hue just under the head. The head is thin and slightly fizzy on the palate.
The nose has loads of vanilla; caramel; fresh coffee bean and candy floss. The palate is sweet to start and really candied but finishes with a bitter hop oiliness that gets more intense as the sweetness fades.
Really unusual and I'd imagine; the reference to waking the dead is in relation to the hop content on the finish; it's about as unexpected as finding a chewing gum ball at the end of your plastic ice-cream container... pleasant surprise for most but shock for those with bubblegum allergies.
Fortunately; I love both.
Ruth xx
*Rogue varieties available to purchase in Deveney's...
-Hazelnut Brown
-Shakespeare Oatmeal Stout
-St Rogue Red Ale
-American Amber Ale
-Mocha Porter
-Juniper Pale Ale
-Dead Guy Ale.