Porter...
The most popular beer question of all time; porter Vs. Stout... What exactly sets them apart?. 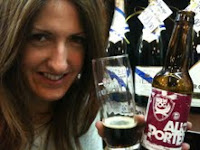 Porter still remains the one style of beer that; when researched; all dates and origins differ. Is it Irish; British or German?; Was the style created pre 1700's or somewhere between 1735 and 1739. I can't answer any of them with confidence. Most accounts of British Brewing in the 1700's say that Porter was a ready made blend of 3 different styles previously available - ''ale''; ''beer'' and ''twopenny'' and because it was a combination of all 3; it was known as ''entire'' (I love this)... When doing my research; it became evident that the style 'Porter' evolved due to economic circumstances and not as a result of the romantic elusive myths... I'm going to ignore that though and continue with conjured thought of cobble stoned Dickens streets; shoves of mist and secret beer recipes brewed under cloak.
Alice Porter; named after 'Alice' the Lewis character; is a traditional Porter with the Brewdog twist. It's a 6.2% dark porter.
The nose is complex and really unusual. I get medicinal elements; like a tonic with eucalyptus; orange and malt. The palate displays malt; coffee and quinine with a really nice balanced sweetness to counteract the oiliness and acidity of the quinine flavours.
It's a tough one to match with food because although the flavours I'm describing are quite brash; it has this elegant lightness. I reckon this is a beer for game meat. If you're out hunting pheasants in your tweed over the weekend; stop by for a couple of bottles... Far more economical that a 1st growth Bordeaux.
Good job lads; again.
Another great Brewdog varietal to add to your list.
Ruthxx.
Posted by Deveneys at 1:36 PM

The three-threads/entire story is a pervasive myth about porter. Zythophile writes about it here.

As to the difference between porter and stout, today there's none, really. Zythophile again.

Alice Porter is lovely, though.

Thanks John;
Hope things are good over there with you... Long time no see. R.