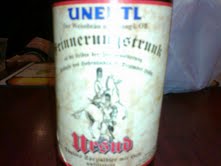 Apart from really liking what these guys do; which I do. I will also admit to ordering this beer due to it's physical appearance;  I hear you sigh; the sigh of shallow Deveney. The label gives me label lust and the bottle is equally as lovely. Now; the important bit; the beer is delicious.
It pours like a rich; slightly viscous Dunkel; with a head that's reminiscent of sea foam from Dun Laoghaire pier; appealing or not; that's what it looks like. 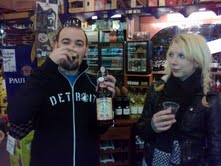 The nose is premium weisse. Buttery with banana; malt and mocha notes.
The palate is equally as delicious. Lot's of flavours. Caramelised sugar; banana; coffee; malt and some chocolate flavours.
All who tried loved and also asked for seconds.
In Deveney's; limited supply; definitely try.
Ruthxx
Posted by Deveneys at 5:33 PM 1 comment: 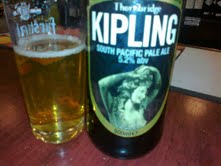 Thornbridge beers have arrived in Ireland!!
A little pricier than other great U.K breweries but this is definitely a ''get what you pay for'' scenario.
It's been a while since an English beer has left me thinking that if I never got the opportunity to consume another beer again; I'd be happy with this as my last.
Thornbridge Kipling; I can safely say; is my new beer love.

It pours the colour of a good bottled lager; lemon and honey with a thin white head.
The nose can only be described as having breakfast with the man from Del Monte . White grapefruit is really prominent with some ripe mango. In fact; if you were to smell this blind folded; I'm not sure if you'd guess immediately that it was a beer. I don't want to put you off though; there's nothing sweet or synthetic about the nose. 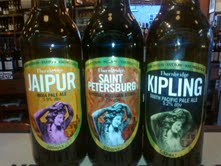 The palate is identical to the nose. It has the clean acidity of a sugar-less grapefruit; complete with that tingly feeling you pick up on the side of your tongue. The flavours are white grapefruit and white grapefruit and surprisingly; white grapefruit. I don't detect any mango or warm tropical fruit. The smooth; crisp beer flavour kicks in on the other side of the fruit and compliments the consumption process to the limit.
The carbonation is evident but nicely integrated.
This beer is definitely a constant reminder of longer days and warm evenings.
Thorbridge Jaipur and Imperial Russian Stout available also. notes on these to follow but by all accounts; best newcomer award pending.
Ruthxx
Posted by Deveneys at 1:46 PM No comments: 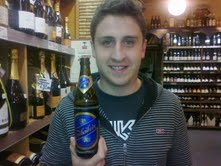 We tasted Frankenheim AltBier this evening.
Alt is the German word for old; you can't classify a bottle of Miller found in the back of your granny's drinks cabinet dated 01/99 as an Alt; it's a style; using warm top fermented yeast; overtime the temperature is adjusted and the beer is stored (lagered) for long periods of time after fermentation.
This is a golden brown beer; looks similar to an aged rum with a thin white head 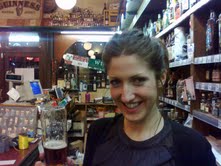 The nose smells like an average beer - nothing unusual; malt and hop elements.
The palate has metallic and mineral flavours with hops and a rustic finish. It's clean and fresh and has enough acidity on the finish to give you a shivery spine.
Try this with a baked ham; cold or hot. Salads and vintage cheddar.
Available in Deveney's of Dundrum
Ruthxx
Posted by Deveneys at 12:33 PM No comments: 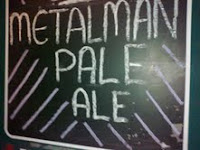 The Bull and Castle; Beer Hall was heaving last night. The newest editions to the Irish brewing scene - Grainne and Tim; were showcasing their 'baby'- ''Metalman Pale Ale. Bloggers; brewers; beer enthusiasts; retailers and wholesalers all turned out for the gig. 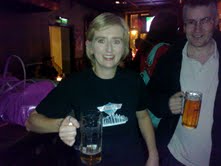 I am a massive fan of The Bull and Castle and I also have a serious soft spot for Irish craft beers so there was no question about my attendance.
On arrival; David thrust a cold; condensation clad beer into my hand and immediately it felt like a Saturday night. Unfortunately it wasn't and I did have to return to Dundrum; to close up the shop but for those few minutes the weekend hysteria crept in - Great boozer with potentially great beer in hand...

I am massively impressed with this Pale Ale. I had done a little bit of internet research on other Metalman reviews and some said it was very similar to other Irish Pales on the market. I do admit that when drinking beer I really only consume bottle format but I can confirm that this is like no other Irish Pale I have tried. 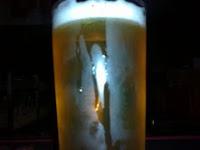 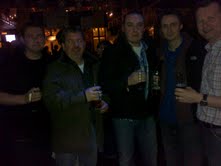 It's a lovely golden nectar colour with a thin white head. The palate is really clean with very strong flavours of grapefruit and fresh lemon peel and it finishes with a slightly metallic flavour  It has a fine effervescence; not overly carbonated. Really refreshing and tastes exactly like an ideal summer beer- garden brew.
Congratulations to Grainne and Tim.
Another great Irish beer and living the dream - Best of Luck!
Ruthxx
Available by glass or pint in:
The Bull and Castle; Christchurch
Mulligans; Stoneybatter
Against The Grain; Camden Street.
Selected establishments in Waterford.
Bottling with any luck this year!
Posted by Deveneys at 12:50 PM 1 comment: