Orval Trappist and the great story.


The history of Orval is definitely worth telling and drinking simultaneously.


So; The legend surrounding the ancient monastery of Orval involves the stunningly beautiful Countess Mathilda of Tuscany.
Whilst visiting the area almost 1000 years ago; she was looking into a small pond; admiring her reflection!!! When she dropped her golden ring into the water.
The ring disappeared into the muck at the bottom of the pond. The Countess was devastated and prayed to God to return her precious belonging and in return she promised to declare the land sacred and build a monastery. With that a fish surfaced with a ring in it's mouth - hence the label design.
She stayed true to her promise and still to this day the pond is enclosed behind the monastery walls. The monks claim that this is the exact site where the beautiful Countess met the holy fish.
Apart from this being a great story; the beer is equally as impressive.
It pours a caramel colour with a coffee coloured head.
The nose smells like clove; aniseed and toffee. You expect a mouthful of creamy luscious fruit as a result of this but it's a polar opposite beer.
The palate is like fresh lemons and orange flavours with some clean acidity on the finish.
This is a beer for a pastrami sandwich or salads.
It's an original old-skool ale and deserves it's iconic reputation.
You won't be disappointed.
Ruthxx

This is a beer for the Wednesday blues; possibly I'm the only one who suffers from these. I have consulted some of my office pals and they all concur that their mid-week slump lands on a Tuesday. Whatever day you feel the urge to wrap your jacket around your waist and sprint to Cobh with no intention of returning; this is a far more reasonable vent and if you can hold off till after 6pm; you'll manage to keep your job also... Everyone's a winner.
This pours like a traditional English ale; dark golden with some red flecks. It looks like beer-ified  Autumn. A thin white head tops it.
The nose; like The Humming Ale by these guys; has strong peach notes with some burnt sugar and malt.
The palate has sweet fruit flavours; brown bread; malt and maple syrup. It's got some sugar evident on the palate but that's to be expected; it's 8.8% alc.
Don't let the Barley Wine style put you off...
Drink it now with goats cheese or a bar of Alpine milk Chocolate. If you're the patient type; cellar for up to 8 years and let us know what it's like...
Enjoy
Ruthxx
Posted by Deveneys at 11:55 AM 2 comments: Bargains and coupons are the 2011 of holiday homes in Mauritius and €40 bottled water.
Although I can't offer you beer stamps; I am prepared to pick a page a month and supply a deal that warrants a visit to Dundrum.
Fruh Kolsch; page 378.
February Special.
4 bottles €10.00
(while stocks last)
Forget Lidl €4 Prosecco. Deveney's is where it's at...
Ruthxx
Posted by Deveneys at 1:52 PM 1 comment: 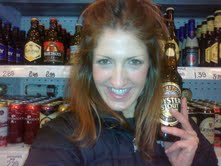 It's a miserable day here in Dundrum. It also doesn't help that I had a relatively late night last night and that I went against my better judgement and regretted to take my car͵ under the guise that I might want a second beer!!... I think we all know that that was a lie.
Despite this bearing a word that reminds me of a bad weekend spent in Carlingford with an ex-boyfriend͵ who I developed a distaste for similar to that of Oysters.
Let's do it today͵ face those Sunday fears and previously bad long weekend breaks.
Marston's Oyster Stout doesn't actually contain Oyster extract. Stout and Oysters were traditionally the poor man's meal. This is a stout that comes branded as the ideal accompaniment. Let's just take them at their word on that though.
It pours like a stout͵ looks like a stout and has a head that resembles a stout.However it initially doesn't smell like a stout. It smells like a pale ale͵ loads of floral aromas. Maybe garage carnations? with a mineral element and a slightly roasted tweak.
The palate reverts back to it's labelled beer category. This tastes like a stout. A light stout. Roasted malt with some floral flavours͵ nice effervescence and clove on the finish. It has a spiciness that I've never tasted in a stout before and it's very pleasant. Not pleasant enough to visit the fishmonger but good.
Enjoy your Sunday!!
Ruthxx
Posted by Deveneys at 4:25 PM No comments: Apologies to all those that misread the tasting date and turned up this evening.  Our February tasting is scheduled for Thursday 10th and despite popular belief (in the form of 3 angry men) I did not amend the tasting date͵ you just read it wrong!!!
St Bernardus Pater 6 was opened as compensation.
It pours the colour of a ''Coke Float'' with a frothy thick head.
The nose is malt͵ caramel͵ milk chocolate and cherries
The palate͵ as you inhale is strawberries and sweet fruit. This changes quickly and finishes with malt and black liquorice.
It's a 6.7% ale. Enough to make you feel as jolly after 4 bottles as St. Bernardus himself.
Eoin and I both liked it and it managed to placate the 3 placard- holding- conspiracy- theorists. 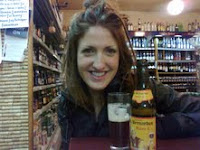 See you 3 and everyone else NEXT Thursday!!.
Ruthxx
Posted by Deveneys at 11:02 AM No comments: 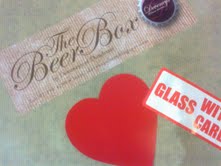 Is there anything in the World that says ''I Love You'' more than a box of Beer???...
Milk Tray may suggest otherwise. However͵ just a tip͵ I can guarantee that purchasing this for your female better half may result in the opposite desired effect͵ unless of course͵ the ultimate aim is just that and requiring ownership rights of the hind legs of a Jack Russell and that taking up residency with the garden furniture in a Wendy house seems appealing... This is your gift!!!
The Beer Box is all about love for February.
It's the usual drill͵ a 12 bottle box (Valentine themed)͵ a glass and a love snack͵ delivered to your door͵anywhere in Ireland (R.O.I) for €50.00.
Make the call 01-2984288
Stop in to see us : 31 Main Street Dundrum
or drop me a line: ruthdeveney@gmail.com
(Website currently under construction)
Happy Valentines Day
Ruthxx
Posted by Deveneys at 4:48 PM No comments: