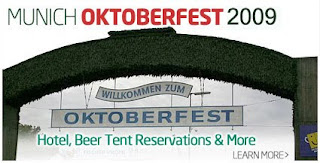 Funds are a little tight this year so we'll be bringing the Oktoberfest to Dundrum as opposed to you guys to the Oktoberfest, sorry to disappoint!!!
To ensure delivery of all I'm pushing the Tasting back to the last Thursday - 24th September.
As it's the biggest beer festival of the year the line-up will be a minimum of 8. Hope you can all make it. I'm working on a pig on a spit for effect.
Thursday 24th September, Deveney's Dundrum, 6.30pm - 8pm.
I'll post the beer format up as soon as I get clarification on stock.
See you all here pals
Ruth xx
Posted by Deveneys at 12:59 PM No comments: 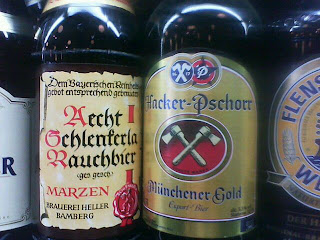 My first ever smoked beer - Aecht Schlenferla Rauchbier, Marzen. I'm pretty sure that we're not going to be great friends but I'll definitely give it a go for curiosity purposes alone. This is a dark, aromatic, bottom fermented beer. The malt is exposed to the smoke of burning beech wood during the malting process and is then mixed with premium class hops and matured in 700yr old cellars in the hills of Bamburg. The brewery's description of the beer is ''Even if the brew tastes somewhat strange at first, swallow, do not stop because soon you will realize that your thirst will not decrease and your pleasure will visibly increase''...... I'll be the judge of that!!!

The 2nd new arrival is, i think a little easier on the palate. Hacker Pschorr Munchener Gold. These guys are renowned for their wheat beers and as their brewing process has virtually remained unchanged for over 580years this reputation is not surprising. The history of the brewery can be traced back as far as 1417. Expectations are pretty high for this!!!

Gotta take my work home with me this evening..... Seriously tough job!!! 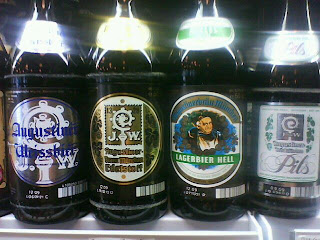 Get in touch if you want a stash - it'll move like Linford.

Posted by Deveneys at 6:48 PM No comments: 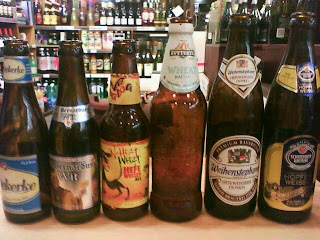 Each of these tasted last Thursday were nicer than the previous. For the first time we all had difficulty deciding on the top 3 - let alone the favourite.
The Theme for the August tasting was white beers. I tried to diversify the line up so we did 2 Belgian, 2 German, 1 American and a Lithuanian.
Although Belgian wheatbeers would be considered the benchmark white beer, the others made for very interesting comparisons.
The first of the night was Wittekerke authentic Belgian wheat beer. This pours a yellow creamy colour and drinks like a glass of milk. On the palate its light in flavours, flowery with a slight hoppy and citrus finish and a creamy mouthfeel. It doesn't feel anywhere near 5%alc. I loved this until we tried St Bernardus Wit. This was by far my favourite beer of the night. Summery, fruity really crisp palate and a refreshing zesty finish. The palate was orange, honey and herbal notes. Felt heavy on the palate but the wheat didn't form a pizza base in the pit of your stomach. Really summery and easy drinking. Brewed with the help of Pierre Celis - the guy who put Hoegaarden back on the map. Not massively into the picture of St. Bernardus on the bottle - he's a little strange looking. The beer is really really good though.
Flying dog - inheat wheat, 4.7%. Hefe ale that hails from the United States. I was really pleasantly surprised by this American take on a German wheat beer. I'm a huge fan of American micro-brewery stuff but probably because they're a little lighter in style than there counterparts and an easier more approachable style. This definitely didn't have that heavy doughy mouthfeel but the nose and palate were distinctly banana, slightly floral -heather maybe and a creamy slightly citrus finish. Very good, very very good.
We moved into Lithuania and Svyturys Baltas, 5%. non filtered wheat beer. Banana and clove on the nose, fresh and zesty with a delicious creamy palate. Flavours of orange, clove, banana and a slightly spicy - black pepper finish. I think you know what I'm gonna say - really good, really really good!!.
Weihenstephaner dunkel/hefe 5.3%. From the oldest brewery in the world and awarded the best dark beer at the World Beer Awards. A totally different palate than the previous few. A more wintery style of beer- rich and dark whilst still retaining the qualities of an authentic German wheat beer. Banana, clove, spice, caramel with a juicy heavy fruit finish. A beer designed both to accompany food but pretty amazing in a cold tulip glass watching t.v.
The last German wheat beer of the night was a little unusual and got a mixed reaction. Personally for novelty and innovation alone, I rated it pretty highly and love the concept.
This is a collaboration between Brooklyn Brewery and Schneider. Combining the traditional style of a German Wheat beer with an American twist. Schneider/ Brooklyner Hopfen Weisse. At 8.2% this is huge wheat beer which is heavily hopped. The palate has banana and spice with some floral hop characteristics and high residual sugar but a very balanced acidity on the finish. I think because it's such a strange blend initially this tends to be a little difficult to get your head around/ palate around. This is the 2nd attempt at this brew and I like the idea of 2 friends with 2 different brewing techniques from 2 great breweries combining their own styles and creating this together - a beer baby!!!
Overall this was a brilliant tasting -possibly the best yet.
Keep you all posted on the new gear arriving this week.
Talk soon
O&O Ruthxx
Posted by Deveneys at 3:28 PM No comments: 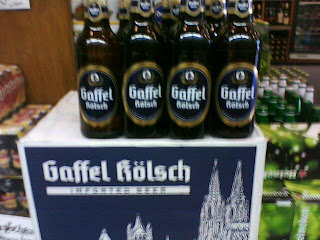 Posted by Deveneys at 5:52 PM No comments:

After careful deliberation the decided theme for August is Wheat beers: 2 German, 2 Belgian, 1 American and a Lituanian for good measure.

Hope to see you all here, looking forward. 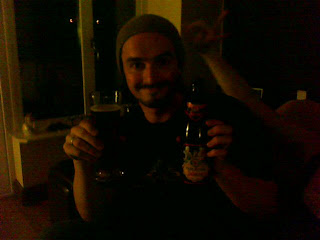 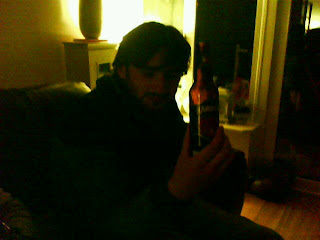 My old pals - Barry, Phil, Stevo, Karl and Erin stopped in last Friday for Jenga and beers. Unfortunately the game format of the night had to be altered due to the lack of remembrance on Barry's behalf. We dug out 'Operation'. As the steady hand wouldn't be my forte, I was disqualified 1st Round for leaving the ice-cream cone in the operated gut...... I'm far better at Jenga, i think.

Phil had a couple of Paulaner Salvators. At 7.9% he'd severe difficulty with sentence structure and coordination. This is a full bodied beer - round ripe fruit palate with a slight malty finish and a nice balanced sweetness.

Barry and I shared a few Samuel Adams Hardcore ciders. Really good easy drinking cider. Red apple flavour, a medium dry palate with good carbonation. Bar also had a few Longueville Cidre de recoltant. I've posted on this before and it definitely slots into my top 20.

Steve, Erin and myself had a few Coopers sparkling ale. This is brewed to be consumed somewhere in Western Australia but didn't taste bad on Nutgrove avenue. Fresh, zesty palate. Citrus fruit with a nice crisp dry finish. Ice cold with some 40degree weather and a bucket of Oporto Chicken..... Almost contemplate doing time for this.

Karl, a bag of McCoys barbecue and a Hooky Gold. He reckoned it went better with these than the toffee crisp that followed. Golden ale, a bit of an all rounder. Easy drinking and a great alternative to a commercial lager.

A late night, loads of reminiscing, good beer and even better stories.